Submissions are unedited, and are being published in the order we receive them. This candidate is standing for the NEC Block of 15.

In 2015, I went to my first ever demo (#GrantsNotDebt on Nov 4), and the experience quite literally changed my life. It made me understand what activism really meant. It’s hard to explain why this is so significant to me, but growing up in Indonesia and being of Indian origin, having only ever seen corruption in both these countries, I always had frustrations about politics. I never thought that those frustrated thoughts could be turned into anything; that they meant something in another part of the world; that challenging systems and governments was okay or that there were various movements of people doing just that.

A couple of months later I ran to be Education Officer at Arts SU (University of the Arts London’s Students’ Union), and that’s when I discovered the world of NUS more specifically. I didn’t know all that much about the NUS then, but I can see the difference that has begun in the last few months under the change of leadership.

From the introduction of regional networks, to summits, conferences, and activist training days that are open to all students not just sabbs, NUS has really made the effort to reach out to students. It’s rebuilt links with the trade unions, prioritised liberation campaigns to centre the voices of those most marginalised, and taken the steps to turn into an active campaigning body whilst still being a lobbying force behind the scenes. 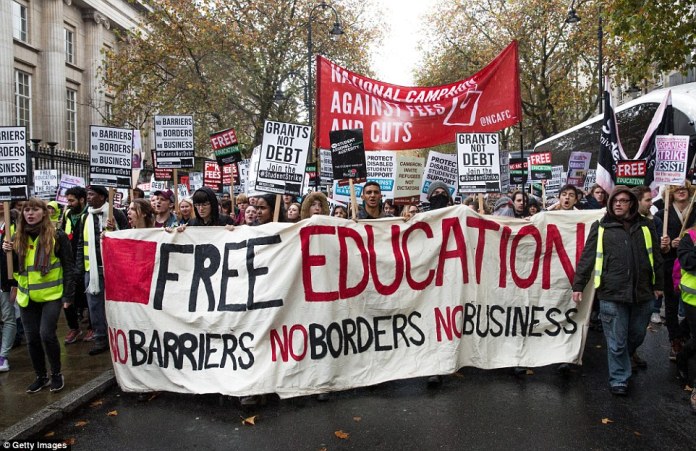 Turning NUS into a movement that every student knows as a campaigning body which stands up for their rights, not just as a discount card, cannot happen overnight. But the last few months have been a positive step in the right direction, and we need more of it.

Instead of spending lots of money on conventions for CEOs, NUS needs to continue to reach out to and empower students that campaign on the ground in their campuses everyday. It needs to be a movement that takes a bottom-up approach.

I stand for a free, democratic, accessible and liberated education system – one that is in the interest of students, not profit

But it also needs to be a movement that openly debates and discusses disagreements, not one that shuts them down. NUS can often feel very cliquey, and while factions are inevitable and can be healthy, they shouldn’t stop people from working with one another if they disagree on something. A united movement is one that openly debates and discusses disagreements, challenging each other in a friendly and healthy manner, and one where organising happens democratically, through elected committee members rather than friendship circles.

I’m standing for NEC on a platform of transparency and accountability for that reason. I firmly believe that those are principles that simply cannot be compromised. The NEC is elected to hold the Full Time Officers to account. Often however, FTOs get elected on manifestos that we never hear of again. There’s a very clear line between harassment and accountability; harassment is never permissible, but political accountability is important. Sometimes it is neglected, only brought up when convenient, which defeats the purpose of the manifestos and motions students vote for during conference.

In my time as a student activist and officer, I’ve sat on on NUS Women’s and International Students’ Committees, campaigned against fees and the TEF, and fought for the rights of international students and all migrants, on and off campus, whether through anti-deportation campaigning or getting my university to prioritise International Students’ wellbeing. I’ve successfully kept UAL from increasing fees for continuing Home and EU students, got them to re-introduce and expand their International Orientation programs, and made sure they improve their Academic Support for International Students.

I’m also the International Rep of the National Campaign Against Fees and Cuts, and I stand for a free, democratic, accessible and liberated education system – one that is in the interest of students, not profit. The HE Reforms currently passing through parliament are some of the most disastrous reforms to Higher Education in the UK. They threaten so much more than just fee increases – they are about turning our universities into heartless businesses, forcing competition and backdoor privatisation. I want to see an NUS that stands up relentlessly to these reforms, and fights them through a diversity of tactics. Lobbying MPs is important but so is escalating the NSS boycott.

Racist border policies and xenophobia have unfortunately always existed in the UK, and today is no different, with the introduction of Prevent and the scrapping of the post-study work visa. Worse, in the current post-Brexit climate, steaming anti-immigrant rhetoric gives those views legitimation. We need an NUS that stands up unapologetically for migrants, and for those most marginalised in our society. I believe that our National Union of Students needs to continue being at the forefront of fighting injustice and inequality across society. In the kind of world we live in, it can be nothing less.

News Desk - June 2, 2021
0
A number of UK universities have said they are planning to keep lectures online for at least the first term of the next academic...

University of Southampton’s latest startup talent to be unveiled at the...

Most students think passing a sexual consent test should be compulsory...

NUS calls for a student support package as one in three...

The future for students and their accommodation because of COVID-19