Moving stories of people forced to leave their home country because of their sexuality have been told as part of #DMUpride month.

“Some of their stories, what has happened to them, has been horrific,” he said. “There is a real gap in this area within academia. No one has covered this, documented their lived experiences, their own stories in their own words.”

As part of his work, he asked them to share an image which means something to them. Photographs included a backpack, which represented the rootlessness and uncertainty in their journey and a tree, which to one asylum seeker meant hope.

Paschal, who has been working on his thesis part-time since October 2016, presented his findings so far at Pride In Action, which aimed to share stories of LGBTQ people and offer practical help by packing dignity packs to be sent to refugee camps in Europe.

He was joined by an asylum seeker who told his own story of leaving Uganda as a gay man. The decision to leave has left him unable to pursue his PhD and because of the law unable to work in the UK.

Following the talks, volunteers helped to put together dignity packs for LE Solidarity, a Leicestershire organisation which collects and distributes aid to Greece, Paris and Calais. 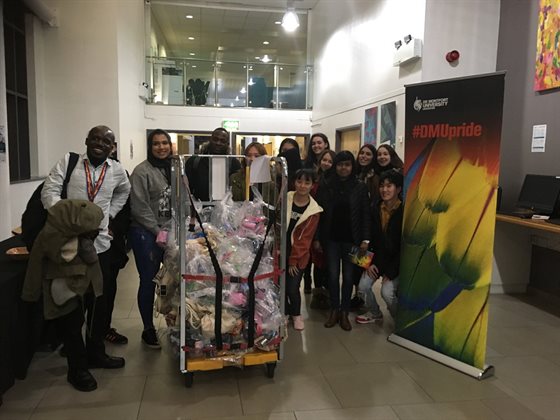 “These things are taken for granted but they can make a huge difference,” said Sunita Patel, senior public engagement officer with #DMUlocal.

“We are very proud to work with LE Solidarity and I know our students get so much from engaging in this work and taking part in the conversations that can come from that.

“I think storytelling can be such a powerful tool in raising awareness. We heard a moving story that is going on right now in a city. Also the stories people tell through photography, these images we don’t always see, that was so interesting and the work Paschal is doing into documenting these stories is so important.”

Mohammmed Bagheri - March 1, 2021
0
Hospitality Weekend In The Woods are incredibly proud to announce the full wave of artists joining their debut festival in September. Across 8 scintillating stage...

Uni students have wasted £1 billion this year on empty accommodation

Supporting strong FE unions and sabbatical officers across the UK